Have you guys met my son? He's fluffy, has 4 legs and is often seen hovering in the back of my dessert photos desperately trying to guilt me into sharing with him. He's a Siberian husky and his name is Tobias.

This is what he looked like when he became mine 22 months ago:

I've always been a bit of an animal person. Animals are my life, more than anything else in this world. My love for them is why I'm now a Zoologist. I love the wild critters, but I have a great fondness of the domesticated ones, too. I've not lived a second of my life without having a pet of one kind or another. I'd feel lost without their company. For most of it, I've lived with a virtual menagerie of them, thanks to all the rescue cases we've inherited. But right now, it's just me and Tobias. And the aquarium.

Today is his second birthday.

He's quite a lot bigger.

I decided I wanted to do something for him I've never done before: bake pet treats! Oh yeah, I went there.

So I baked him some cupcakes. I spent some time looking up dog-friendly recipes, but most of them were the same. I opted for a veggie-based treat. The cupcake is essentially a carrot cake, minus the butter and sugar. Instead they have a little peanut butter and honey, and some schmackos chips folded through.

A lot of the recipes I saw suggested using peanut butter, cream cheese or cottage cheese to ice the cakes. I don't like the idea of giving dogs that much dairy in general, but Tobias especially has a low-tolerance for dairy (evidenced by the time he discovered the Easter egg stash while we were out, and another time when he stole a massive hunk of cheese. Aftermath was not pretty). So I decided to make the icing out of mashed potato. Tobias loves mashed taters and it was the only thing I had on hand that was white and dog-friendly. I knew mashed taters pipe well as I've done so for things like Shepherds Pie before, so I had high hopes. It came out looking nicer than some batches of buttercream I have made.

Rather than adding milk, butter and salt, I added a little water to thin out the consistency and tinted it blue. I decorated them with hearts cut from schmackos treats and sprinkled it with finely chopped dried liver treats: his favourites. 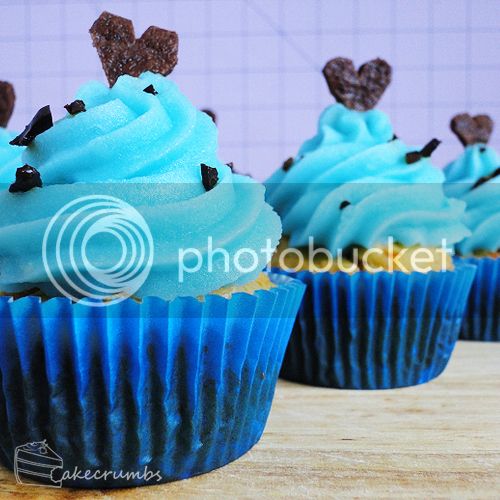 We took the birthday treats outside. Tobias has a habit of throwing around treats he likes and I didn't like the thought of mashed potato all over my house.

Tobias patiently waiting for the command to eat. Or at least pretending to be patient while thinking, "Stop taking photos and let me have them."

He ran straight over and nommed the heart.

But even puppy knows the icing is for last. He flipped it over and began eating the cake bit first.

Nom. He loved them so much that the moment it was finished he started running in circles around the BBQ where the rest were sitting, hoping for a second.

Well, it is his birthday after all, how could I say no? Here's him nomming the second:

Here's the recipe if you'd like to treat your canine friend to some pupcakes. This recipe makes 6 standard pupcakes.